I pursued him with a single minded determination that had been notably lacking in my previous endeavours. I wanted Richard to be mine like I craved my next breath, my next dream. He was a friend of a friend. When family and friends had met Richard, they always expressed surprise; to them, he did not quite live up to the movie star status I’d bestowed on him. It did not matter. Nor did it matter that Richard did not want me the way I wanted him. He told me, over and over, that he did not want a serious relationship; anyone as singular, as exclusive, as a girlfriend.

So I played the game. I worked on making myself as attractive to the typical man as possible. I did not nag him, did not discuss anything vaguely emotional; I did not bother him with my thoughts or fears. I was always ready to go drinking, to party until the small hours. I took whatever scrap he deigned to throw me and was grateful for it. Loving him was an exercise in patience and frustration; I could afford to be patient as I knew that he would eventually see me as his ideal partner, as the perfect girl he discussed so readily with his friends. I endured frustration over how cool he could be, how casually cruel. I was the unwanted guest at the wedding; given a pity invite to view the bride at the church, but excluded for the main event. I spent my spare time working on my campaign, as I privately referred to my efforts. I had plenty of spare time, since I’d been let go. I employed the ever present social media world to my advantage. I spent hours doing my hair and makeup to get the kind of selfie that looked like me but after a makeover from the gods. Instagram was peppered with my “casual” pictures, Facebook inundated with casual statuses about the cool events I was going to. It worked. Friends commented on how much fun I was having, how hot my pictures were. I was seeing Richard several times a week and was content he saw the cultivated image I was portraying. He refused to acknowledge our relationship, even online, which hurt, but I was okay.

February signalled the start of the end for us. I was distracted, thinking of ways I could convince him to spend Valentine’s Day with me. My mind was littered with red hearts and chocolate boxes. It wasn’t unusual for Richard to ignore my texts, so alarm bells didn’t go off as they should have. It was during one of my routine checks of his Instagram account that I first saw the picture of her. “#Lunchdate” was my only clue. I obsessed over that picture. Was it coincidence? He was ignoring me and lunching with some unfiltered blonde. Was she his cousin, some family friend? Did he mean date as in date, date? I tried frantically to find out more about her; spent a frustrated hour counting the “likes” and analysing them. A few hours later, a terse mail message put me out of my misery. He told me it was fun hanging out with me, but we’d have to stop, he actually had a girlfriend now.

When I’d stopped crying, my brain, wired and edgy from a bottle of sauvignon blanc (#sorrynotsorry) started working on a new plan. What could I do to show him what he was missing, how it was me who should be his girlfriend? I ramped up my campaign. Strategic nights in (and out) with previously neglected girlfriends were the perfect excuse to tag myself at great locations; pictures of me sitting on strangers laps; statuses about the hours I’d logged at the gym. I was Perfect Girl on speed; I could talk about my wild, drunken nights with the girls, and then post an angelic looking picture of me with my aging Granny. I was the size 8 girl posing in front of the giant pizza, coyly nibbling the crust (“I love to eat!!!”) yet my Twitter was awash with smug updates detailing my workouts. The key is crafting an update where people like you, but don’t hate you; you need to seem approachable yet unattainable.

Nothing worked. I became obsessed with his social media accounts; I stalked their relationship with the intensity I’d once pursued him. My spare time was spent gorging on his page, her page, and her friends’ pages; until my eyes burned and I knew more about her family than I did my own. It was an addiction I could not keep sated.

That was a year ago. My battle has been a bit tougher than I previously imagined. Richard and that girl are still together. I keep in touch by his social media accounts, of course. (They celebrated their one year anniversary with a weekend in London; I was glad to see he finally got the job he wanted). My days are a bit awkward. The tension between my mother and me, well it’s been steadily rising. Mum doesn’t seem to be aware that there are no jobs out there; what’s the point in applying for them? I’ve lost a few friends, lots of snide remarks about doing nothing and wasting my days. That and being called a user. Whatever. I keep myself busy. I wake up with my eyes stuck together from yesterday’s mascara and a head full of dreams. By the time I check all of the accounts and pages and see what Richard is up to, it’s almost lunchtime. If I have time, I’ll change out of my pyjamas. I try not to see the look on my father’s face and the noisy sighs from my mother as she hovers. I obligingly lift my legs up so she can hoover beneath my chair. Depending on what music Richard is listening to, I might browse for some obscure videos and upload them. Blog a little. The day is almost over then.

I’ve noticed the “likes” have been drying up. I have an itchy feeling in my stomach I don’t want to identify as desperation. I have begun to rely on affirmation from the majority of my 600 followers and friends. I notice I’m being edged out by the girls actually going places, with fresh pictures and fresh content. I need to take drastic measures. There are lots of topics trending on anxiety and depression. (Seriously, check Twitter.)

I doubt very much that I am depressed. Apathy and boredom, while not the most pleasant of mixes are not the same as depression. Nor is loneliness. Sometimes I wake up and feel very low but all it takes is a few comments on my latest picture or fifteen plus likes on my status on Facebook and I’m flying. But the last week or so a new plan has been forming in my head, one that I can’t ignore. I lie awake and plan my updates; the surreptitious pictures and the moody, ambiguous posts. I imagine Richard reading them and feeling worried, concerned. Richard hasn’t initiated any contact with me in the last year, but he hasn’t exactly ignored my messages either.

So it is simple. A speedy visit to my GP procures the prescription. I know how to play him, how to look shocked when he suggests a trial of a mild antidepressant. Then I post a picture I’ve taken a few days previously; I especially like it. I put the black and white filter on it, and it’s me, looking sad, out the window. I looked up a few quotes about depression and so I stick one underneath.

The picture hasn’t been the success I hoped it would be. I use another and this time put some hashtags in there for good measure. #Depression. #Anxiety. That ought to get their attention. Their sympathy. I sit back and wait for the likes and sympathetic remarks to roll in.

This just won’t do. My mind moves frantically through ideas and possibilities, franticly remembering all the ploys I’ve already employed, to varying degrees of success.

Sickness is always a good one. A crowd pleaser, if you will. But it’s been done.

I look around in desperation. My gaze alights on my slim, tanned wrist. An idea forms. An insidious plan that will get them to notice, get them to sympathise at long last. I’ll start off with some oblique references, some blurry scars. I’ll build to the scare, the attempt.

I will get back to where I was, no matter what means I have to use.

I will get their attention, their sympathy.

They will remember me.

The featured image accompanying this poem, entitled ‘Hexa Hedron’, have been used with the permission of artist Patricio Betteo.

Caitriona Murphy lives in Ireland with her family. She is a nurse by day, which indulges her continued fascination with human nature. Caitriona’s work has been published in short story anthologies and online. Caitriona loves words (pretty ones and ugly ones), is a certified Crazy Cat Lady and a Disney aficionado. 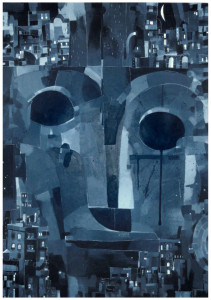 Crying, I recall my father shudders, remembering tall thin men at the foot of the bed apparitions at night, faceless heads like pins, mostly arms,

Comatose (or You Don’t Know Where You Are)

You wake up. Are you dead? You don’t know where you are. Look around. There is a wide dirt road framed by tall, dark pine 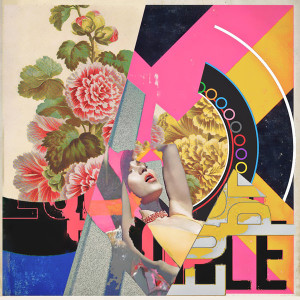 That day, Ezzie didn’t fantasize about leaving her husband the way she did every other day of the week, which when calculated, amounted to five